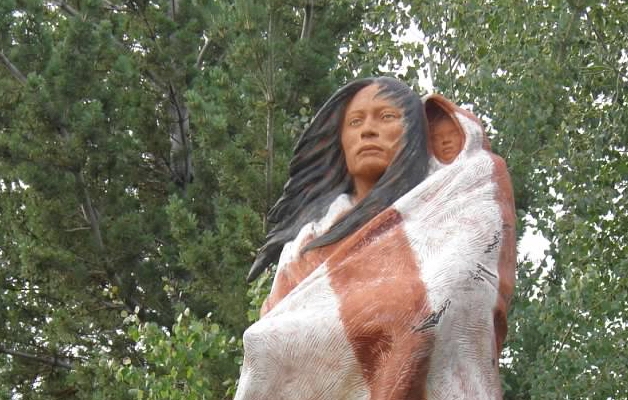 We stopped in Montana at the site of Custer and the Indians final battle often spoken of as Custer’s last Stand. Here stands the Little Bighorn battlefield memorial monument. There are markers all over the hillside indicating where each soldier was found. Closer to the monument are a fewer markers to include Custer’s and the other markers belong to men that were close to him.

Custer’s body is not at the spot he was finally buried at West Point.

We then moved unto Cody, Wyoming where we paid a visit to Buffalo Bill Center of the West. There are a five museums that will need several hours to visit and appreciate the exhibits. After leaving Laramie I was most intrigued about the Indians so I visited the Plains Indians Museum. A beautiful array of exhibits reflecting history of the Indians. Below represents a mere few. Walking on the outside there are sculptures representing the culture.

We are now off to the Yellowstone National Park, such an extensive site with parts in Idaho, Montana and Wyoming. The park features wildlife and geothermal structures, waterfalls, gorges and massive vegetation.

The geothermal activity can be seen in many different parts of the park. Unfortunately our second visit was in the morning and the fog was thick which hampered the visibility from afar. We were able to take the trek Up to get a closer look at some of thee amazing formations and geothermal activities.

The famous geyser erupts about every twenty minutes and there are seats available for visitors to sit and wait for the eruption.

These trees found in the hydrothermal area of the park has the roots appearing like wearing white socks from the mineral deposits after the water evaporates.

There are many waterfalls

and canyons found in the park such spectacular views that were breathtaking. Take a brief look.

As we drove through there was evidence of other geothermal activity along the landscape. We were able to get a glimpse of the Grand Teton mountain range in the distance.

We are now in Jackson Hole a very lovely and active town. The first thing we noticed was some live entertainment in progress just outside of the square. It was quite a production of a western scene and quite entertaining with quite a large crowd gathered. There was this Million Dollar Cowboy Bar which is worth visiting because of the decor. There were several restaurants with a lot of people giving a partying atmosphere.

Another interesting thing I noticed was at the entrances of the square were arches made out of antlers.

We made a stop in Steamboat Springs, Colorado a beautiful ski resort town. We were here not at the ski season so it was not crowded. We were able to browse the shops and take a bus ride along the main which took us in a little among the residences and up among the hotels and motels traveling under some of the chairlifts.

We are now heading to Salt Lake City a place with some history and home of the Mormons. A visit to Temple Square is a must beautiful buildings, gardens and fountains. Inside the Mormon Assembly Hall is beautiful with that pipe organ. We also got to hear it during a few numbers done by their organist. The lighting is awesome and naturally we got a little demonstration.

Take a look around the grounds.

We saw a wedding celebration in progress.

We had the pleasure of dinning at the roof restaurant that offered an array of dishes not to mention the desserts. Afterwards we were able to listen to the tabernacle choir in rehearsals in a larger temple.

We also paid a visit to the State Capital building another impressive building.

A little bit around the town

We continued passing by some salt flats on our way to Kennecott Utah Copper Corporation mining area. This quite a mining operation.

Well will wrap up this tour next. Thanks for dropping by.

This site uses Akismet to reduce spam. Learn how your comment data is processed.